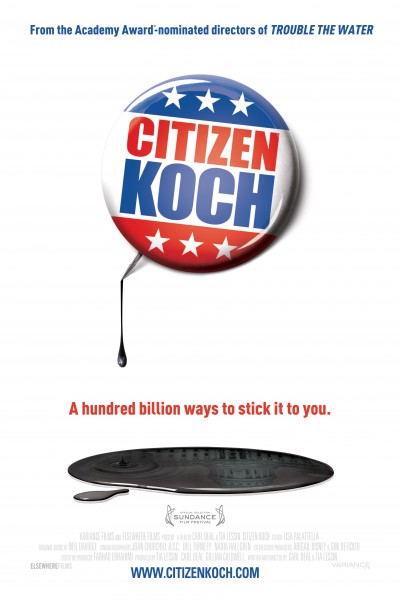 With the U.S. Supreme Court’s Citizens United ruling opening the floodgates for unlimited political spending, it’s now easier than ever to buy an election. But what happens when the voters realize that the billionaires and corporations doing the buying do not have the people’s best interests at heart? This question is at the core of CITIZEN KOCH, the new documentary from the Academy Award®-nominated directors of Trouble the Water, Carl Deal and Tia Lessin.

The filmmakers break down the politically-motivated maneuvering behind the Supreme Court case that changed the way our democracy works, making way for the 2010 midterm elections that ushered in a new wave of ultraconservative Tea Party politicians. The Tea Party positioned itself as a citizen-powered, homegrown movement borne from sheer patriotism, but was actually one of the most well-funded and corporately-orchestrated political operations in history. Republicans capitalized on this new era with huge gains not just in Washington, DC, but across the country taking control of 29 governorships, and 26 state legislatures, including sweeps in the critical presidential swing states of Wisconsin, Ohio, Pennsylvania and North Carolina.

Wisconsin’s newly elected Governor Scott Walker, a rising star in the GOP and a 2016 presidential contender, declared Wisconsin “open for business” and began doling out tax breaks to large corporations and millionaires, while eliminating collective bargaining rights and reducing pension contributions and health benefits for state employees. Wisconsin, the filmmakers discovered, had become a testing ground for the Tea Party’s larger plan to kneecap their political opponents in both state and federal elections, regardless of the cost to voters, Republicans and Democrats alike.

CITIZEN KOCH tells the story of the changing American political landscape through the eyes of three Wisconsin state employees, all lifelong Republicans, who suddenly find their party taking direct aim at them, stripping away the economic ground their families have built and depended on for generations. Aided by a PR blitz by out-of-state Tea Party groups, Walker successfully shifts the blame for the country’s financial problems away from Wall Street’s wild west practices and onto school teachers, sanitation workers, prison guards and nurses – many of whom were the very voters who elected him to office. After Walker rams through his “reforms,” a bi-partisan grassroots movement to recall him begins. But the recall movement collides with the Tea Party-aligned “Americans for Prosperity,” founded and lavishly financed by the world’s richest men — billionaire brothers David and Charles Koch, who are among Scott Walker’s biggest financial supporters. As Republican working class voters witness the Tea Party takeover, they are torn between loyalty to the GOP and the realization that their own party has made them the enemy.

Alternately terrifying and wickedly funny, CITIZEN KOCH asks a defining question: will big money destroy not only the Republican Party, but our democracy itself?